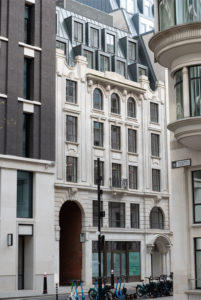 The fully restored principal elevation to Coleman Street makes a positive contribution both to the conservation area and the street scene, with its new shop front with circles motifs taking their cue directly from the original design (as shown in historical photos.) and a new contemporary double storey mansard with standing seam zinc at the 5thfloor.

One of the key aspects of the scheme is the construction of a new extension on to the existing rear courtyard area. 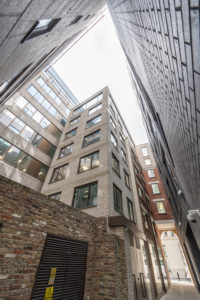 The new facade set back from the existing elevation thus allowing the existing facade to take precedence and providing a visual break between the retained and the new extension. The type of brick used for the extension  complements the portland stone on the principal elevation (a pale grey with matching mortar) and duly contrasts dramatically with the retained brickwork of the existing building. 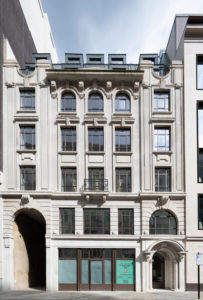 When the facade reaches 6th floor level there is a marked change in the treatment of the fenestration, with a spectacularl full height curtain walling.